Most common herbs for every kitchen 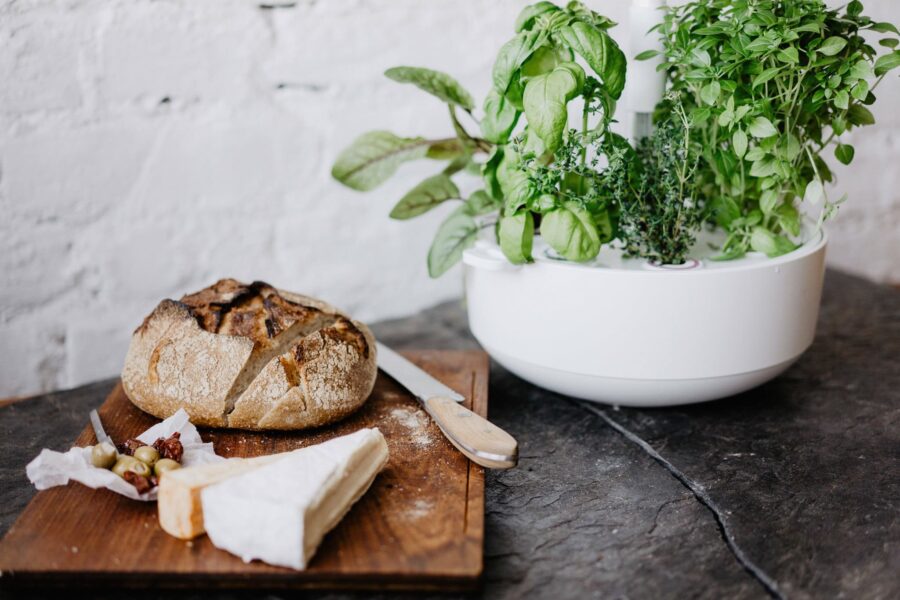 Are you keen to use more herbs in the dishes you eat but find yourself unsure about how to use them? Is the sight of a dried out herb pot on the kitchen table all too familiar? Fortunately, the most common herbs in the kitchen have a variety of uses, whether that’s in cooking, when seasoning desserts or for decorating drinks. Read below Plantui’s list of the kitchen’s best herbs as well as our tips on the many ways to use them.

Basil is such a common herb and an integral part of so many culinary palates, it is the unacknowledged king of the kitchen. Use basil immediately and preferably fresh, as cooked or dried basil loses some of its delicious flavor. Basil is familiar from Mediterranean cuisines and is a special companion for tomatoes, and used in pesto, sauces, pizza and pasta. In desserts, you get the best of basil when paired with strawberries, raspberries and plums.

Rosemary is another herb familiar from Mediterranean cuisine that resembles the branches of a conifer tree. Thanks to its woody qualities, it’s good in cooking and is very resistant. Aromatic rosemary is often used in casseroles and especially for seasoning mutton, pork and veal. In addition to food, rosemary is also excellent as a seasoning in oil or with various drinks. In addition to its distinctive taste, it is also believed that rosemary has a variety of health benefits, such as increasing blood circulation and reducing wrinkles.

Mint is a powerful and lively summer herb. Traditionally, it has been used not only in lamb dishes but also in tea and alcoholic drinks, salads and to bring a freshness to desserts. Mint is an easy place to start when you want to bring greater use of herbs into your cooking. For example, try pairing mint with strawberries, watermelon, peas, feta or potatoes. Mint is also perfect as a garnish when decorating a summer buffet table. Also, have a look at this recipe for making a tasty mint jelly.

Dried oregano on top of pizza is known the world over, but how else can fresh oregano be used? The fine-flavored herb has a familiar taste to that of thyme and marjoram, and nicely brings out other flavors in dishes. Oregano has traditionally been associated with Italian, Greek and Mexican cuisine, where it has been one of the most well-used herbs. The nuance of oregano is very suitable as a companion with other Mediterranean herbs, particularly in pasta and tomato dishes, as well as with meat, fish and chicken sauces.

Dill is a hugely popular herb in Finland, especially in summer, when it’s paired with new potatoes and fish. The whole plant of dill is edible, and its stems and seeds have typically been used when cooking crabs and preserving cucumbers. Dill also brings summer flavor to other preserves, marinades and sauces. After the summer, the dill can be frozen for later use, with its taste undiminished whilst in storage.

Thyme is one of the most common herbs and the oldest medical plant in the world, especially used in cough remedies. In addition to medicinal purposes, thyme can be used in a variety of ways in the kitchen. Its taste lasts well in cooking, bringing out the flavors of wine and food. Thyme is regarded as the best herb in the kitchen, so try it out in meat and fish dishes, marinades as well as something different in desserts. In addition to leaves the thyme plant has flowers, which are edible and suitable as delightful decorations.

Lettuce is an easy, useful and a delicious tasting plant that produces a harvest throughout the growing season. Cultivation requires little more than plenty of…

Peat is an organic soil type that is created when plant material hasn’t entirely decomposed. Peat is produced in anaerobic and humid conditions. Other than…

Dill is a herb most people are familiar with as an accompaniment for fish or when paired with boiled new potatoes. However, with its mild…

Sign up to our newsletter and get 10 % off your next order!